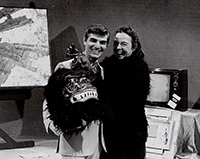 Elsie and Henry Hillman (center) at the ground breaking of Hillman Cancer Center, 1999. 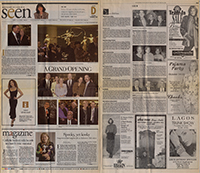 Not content to just participate in politics, Hillman’s career was also one of civic and community engagement. From a young age, brought up in a tradition of volunteerism, she began a career aimed at supporting, helping, and bettering the lives of others. She served on numerous boards of organizations including the Pittsburgh Symphony Orchestra, the Hill House, WQED, Mount Mercy College (now Carlow University), Chatham College, the University of Pittsburgh, and UPMC. A civic actor, she served with groups such as the Pittsburgh Cultural Trust, the Riverlife Task Force, the Pittsburgh Financial Leadership Commission, and the Citiparks “Save Our Summer” Program.

One of Hillman’s earliest commitments to helping the community was in serving the Hill House Association during its formative years. Following the years of the Pittsburgh Renaissance, the surrounding areas, such as the Hill District, were in need of redevelopment. A 1964 Health and Welfare Association of Allegheny County report proposed closing the Anna B. Heldman Community Center, the Hill City Youth Municipality, and Soho Community House in favor of a new agency which would later be the Hill House Association. Elsie served on the board of directors in its formative years and has long remained committed to Hill House’s mission ever since.

Elsie Hillman’s relationship with WQED began in 1954, the year of QED’s founding, with Elsie and longtime friend and sister-in-law Audrey Hilliard working as advertising assistants. It would not be long until Hillman herself became part of the programming at WQED, hosting the annual Great TV Auction – a fundraising event for the public television company.

After her retirement as Republican National Committeewoman as well as Chair of the WQED Board of Directors, the Elsie Awards were established in 1996, following a tribute event to her “For the Love of Elsie.” Every two years, national and local community leaders and actors were honored – among them First Lady Barbara Bush, Frieda Shapira, Fred Rogers, Danish Comedian Victor Borge, Bill and Patti Burns, Rachel Melon Walton, and WQED alumnus Michael Keaton.

Elsie Hillman played a key role in the development of first-class healthcare in our region – most notably in the development of the region's cancer-treatment system. Hillman played a key advisory and advocacy role for the Pittsburgh Cancer Institute through the 1980s and 1990s as part of the Regional Advisory Council aimed at creating an environment for first-rate treatment and research. In 1999, Elsie and her husband Henry, helped in the creation of a new cancer treatment center in Shadyside – UPMC Hillman Cancer Center, which officially opened in 2002. The center currently operates as the main cancer treatment center in the region.

When in the City of Pittsburgh was faced with a severe financial situation, Elsie worked to try and fix the city’s impending crisis. Elsie, with former U.S. Steel President David Roderick, co-chaired the Pittsburgh Financial Leadership Committee making recommendations in the way the city’s finances are handled and reviewed, including the creation of a new fiscal advisory board in addition to suggestions for effective cost reductions.

When the same fiscal crisis threatened city services, including the closing of city pools during the summer of 2004, Elsie was key in creating a fundraising campaign aimed at providing crucial financial assistance in form of “Save Our Summer.” With the help of donations both big and small, 16 city pools throughout Pittsburgh were able to remain open throughout the summer.