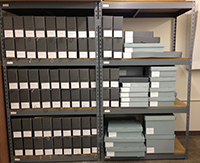 The Elsie H. Hillman Papers are located at the University of Pittsburgh's Archives Service Center. 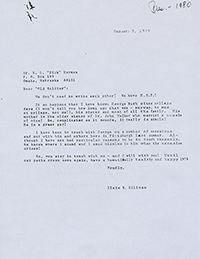 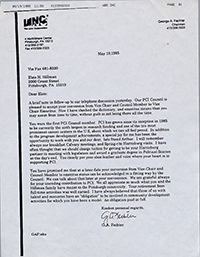 A note from Tom Ridge to Elsie 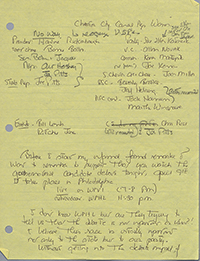 The Elsie H. Hillman Papers
at the University of Pittsburgh

Following the completion of Never a Spectator, the University of Pittsburgh acquired Elsie’s personal papers in 2013 and they are currently housed at the Archives Service Center of the University of Pittsburgh’s Library System. Comprised of over a hundred boxes of manuscript, photographic, and audio-visual material in addition to political memorabilia, the Elsie H. Hillman Papers are a rich resource documenting Elsie Hillman’s career.

Overview of the Collection
A large collection, Elsie’s papers are divided into fourteen series – each one documenting a different aspect of Elsie’s life and career:

Series II. Campaigns covers Elsie’s work in directing and working on the campaigns of Presidents such as Dwight D. Eisenhower and George H.W. Bush. Additionally her efforts on the campaigns of prominent state politicians such as Dick Thornburgh, John Heinz, Tom Ridge and Barbara Hafer are documented here as well.

Series III. Other Political Activity documents Elsie’s work with political organizations such as the Republican Future Fund and Republican Leadership Council. Additionally, there is a great deal of correspondence and additional material documenting Elsie’s friendship with numerous Presidents and their families including Gerald Ford, and George H.W. Bush.

Series IV. Community Involvement covers Elsie’s work with civic, community, and cultural institutions. Within this series are records relating to her work with the Hill House Foundation, UPMC, WQED, and numerous educational institutions such as the University of Pittsburgh.

Series V. Speeches and Writings contains numerous transcribed speeches, notes, and writings of Elsie Hillman on a number of topics.

Series VI. Awards contains material and records on the numerous awards and honors Hillman has received throughout her career.

Series VII. Subject Files contains records on numerous subjects and topics of interest to Elsie Hillman. Among them are relating to Civil Rights, Pro-Choice efforts, and other topics.

Series VIII. National Awareness documents Elsie’s involvement with organizations aimed at promoting interest or awareness of a particular topic or institution. This includes organizations such as the Blair House Restoration Foundation and the White House Endowment Fund.

Series X. Personal (Friends and Family) documents Elsie’s own personal life, as well as those of her friends and family members.