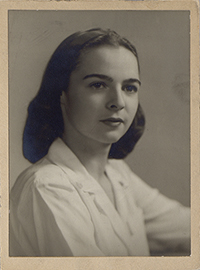 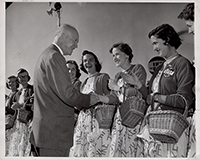 Elsie mask work by members of the audience to celebrate Elsie's career at the Pennsylvania Founder's Day Awards Ceremony, 2002. 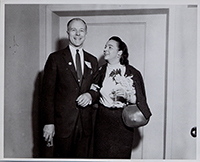 Elsie with her husband Henry L. Hillman during the night of her election as Republican County Chairwoman of Allegheny County, 1967. (Copyright: Anthony R. Greco)

Elsie H. Hillman and George H.W. Bush during a campaign stop in Pittsburgh during the 1980 Presidential Campaign, c.1980. 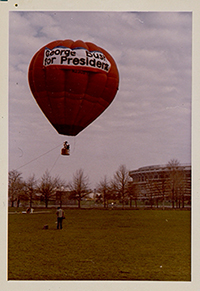 Elsie H. Hillman with former Senator Hugh Scott, who acted as a mentor to Elsie during her early career, 1981. 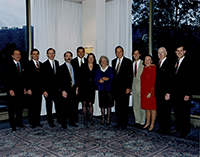 Elsie Hilliard Hillman was widely recognized for her political leadership in the Republican Party and for her dedication to her hometown of Pittsburgh through both civic and philanthropic leadership.

Born Elsie Mead Hilliard on December 9, 1925 to Thomas Jones Hilliard (1894-1952) and Mariana Talbott (1897-1950) in Pittsburgh, Elsie’s family lived in the neighborhood of Squirrel Hill, then later in the communities of Hampton Township and Fox Chapel. Her father was the president of the Waverly Oil Works Company and later became a vice president at U.S. Steel. Elsie was the fourth of five children born in the Hilliard family. Her siblings include: Mary Jones Hilliard Jackson (1919-1999), Thomas Jones Hilliard, Jr. (1921-2015), Harry Talbott Hilliard (1923-1993), and William Raymond Hilliard (1928-1990). She attended the Ethel Walker School (Simsbury, CT), graduated from the Ellis School (Pittsburgh, PA) in 1943, and then attended Westminster Choir College (Princeton, NJ).

Following her first year at Westminster, Elsie M. Hilliard married longtime friend of the family, Henry Lea Hillman, on May 12, 1945. Mr. Hillman, born in 1918, was serving in the United States Navy at the time of their marriage, and is the son of John Hartwell Hillman, Jr. (1880-1959) and Juliet Cummins Lea (1885-1940). The newlyweds resided in Texas, where Mr. Hillman was stationed. Elsie would not return to Westminster.

Like the Hilliards, members of the Hillman family were leaders in the business community. J. Hartwell Hillman headed his family company, J. H. Hillman & Sons, in partnership with his brothers Ernest Hillman (1883-1969) and James Frazier Hillman (1888-1972). The company operated as a coal, iron and steel brokerage, and later as owners of mining operations, barge lines, coke ovens and blast furnaces. Henry L. Hillman succeeded his father as head of the company by the late 1950s, and would transform and diversify its holdings. The business would be renamed “The Hillman Company,” which would also include chemical production operations, sporting goods manufacturing, concrete pipe production, and the manufacturing of aircraft components. Mr. Hillman’s prominent business interests have been closely associated with the Pittsburgh Coke and Chemical Company, National Steel Corporation and PNC Bank.

Elsie began her political career as a campaign volunteer for Dwight D. Eisenhower’s presidential campaign in 1952. During this campaign, she was noted for her use of a used car, commonly referred to as the “Ike-mobile,” that was outfitted with a sound system, which she and other campaign volunteers drove throughout the city. Her name would be associated with numerous local, state, and national campaigns for the next five decades. In 1956 she was elected as Republican committee member of the 14th ward in the City of Pittsburgh. In 1964, she was elected as Chair of the Republican Committee of Allegheny County (RCAC) for the 14th Ward. In 1975, she became the National Committeewomen of the Republican Party and in 1978, she was elected to the Executive Committee of the Republican National Committee. She was also integral in the campaigns of numerous Republican candidates including Dick Thornburgh, Arlen Specter, Tom Ridge, H. John Heinz III, Barbara Hafer and Presidents Gerald R. Ford and George H.W. Bush, among others. While campaigns are highly visible events in the political arena, she was also the champion of several high profile causes and issues within the various levels of the Republican Party organization. These include greater inclusion of minorities and women in the Party and support of a women’s right to choose in the abortion debate. Elsie also recognized the emergence of the “religious right” within the Party. Considering her position as a moderate Republican, she became interested in investigating the political shift that would cause.

In addition to her role in the Republican Party, Hillman was also involved in a number of civic and philanthropic activities on both local and national levels. She maintained a long-term commitment to the wellbeing of her native Pittsburgh. She was appointed to serve as a member or chairperson of numerous local government boards, commissions, and tasks forces to study and guide a range of issues, including public education reform, entertainment revenue, Home Rule for Allegheny County, and the financial recovery of the City of Pittsburgh. Her public service also included many of Pittsburgh’s non-profit social service and cultural agencies, such as the Hill House Association, the Urban League, the Pittsburgh AIDS Task Force, the Persad Center, the Pittsburgh Cultural Trust, the Pittsburgh Symphony Orchestra and WQED (Pittsburgh’s public radio and television station). During the financial crisis of 2004-2005, the City of Pittsburgh made a financial decision to close the public pools. The “Save Our Summer” program was formed with Hillman as Co-Chair, which successfully raised funds to keep 16 neighborhood pools and recreation centers open. On the national stage, Elsie Hillman would serve on several White House commissions, commemoration planning groups, and preservation organizations.

As an active member of Calvary Episcopal Church in Pittsburgh's East End, Elsie Hillman participated in several interfaith efforts, particularly in regard to a dialogue between the Christian and Jewish faith communities. Pittsburgh area colleges and universities have consistently been recipients of Elsie’s interest and support. Mr. and Mrs. Hillmans’ first major gift to the University of Pittsburgh led to the creation of Hillman Library, which was dedicated to the memory of James Hartwell Hillman, Jr. (WUP, Class of 1901) on September 6, 1968. Since that time, they have supported many educational programs at Pitt, including a 2014 gift of $5 million to the Institute of Politics, which will support the Civic Engagement Scholars Program. At Chatham University, the Hillmans were co-founders of the Pennsylvania Center for Women in Politics in 1998; later, the Elsie Hillman Chair of Women in Politics was established and reflects Elsie’s commitment to gender equality and the empowerment of women to actively engage in the political sphere. Elsie Hillman also served on the Board of Trustees of Carlow University, where she was a trustee emeritus and was a strong supporter of the Grace Ann Geibel Institute for Justice and Social Responsibility.

The Hillman Family Foundation serves as an administrative and program office to coordinate the charitable giving of the Hillman family. As of 2014, there were 18 individual foundations included in the Hillman Family Foundation, which has provided over $21 million in funding of various projects that encompass Community and Economic Development, Cultural Advancement and the Arts, Education, Environmental and Conservation, Health and Medicine, Human and Social Service, and Religious causes.

Elsie H. Hillman passed away in Pittsburgh on August 4, 2015.